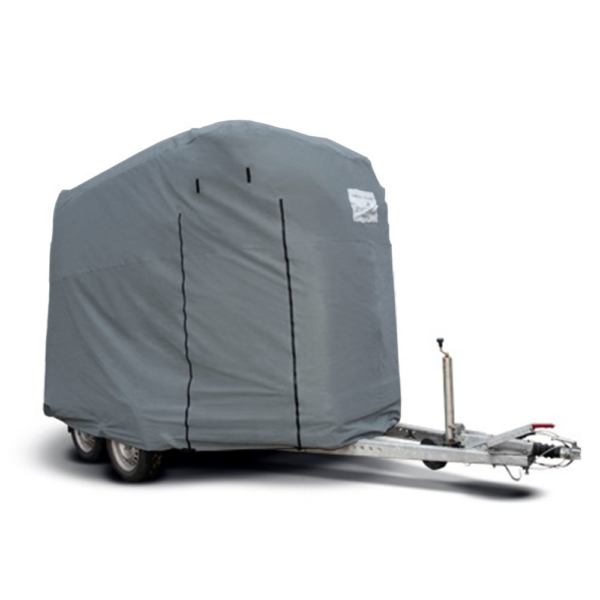 Protect your trailer from weather damage and keep it clean with our perfect protective cover for horse trailers.

The problem is as old as horse transporters themselves:

Because of their height horse transporters are generally parked outdoors owing to a lack of suitable roofed spaces and are thus exposed to weather conditions throughout the year. It is not unusual that horse transporters are rarely or not at all moved out of tournament season. As a result even new and high-quality all-plastic trailers are -after only a relatively short amount of time, and through solar radiation and rain – :

** The term CAPA derives from Latin and describes a medieval garment, which served as rain protection in the 14th century.

What advantages does the CAPA DeLuxe offer?

Our protective cover “DeLuxe” for horse trailers is made from a woven polyester fabric, which was manufactured in the so-called “Rip Stop” procedure.

“Rip Stop” describes materials which were woven in a special technique and are particularly tear-resistant. In this process thicker threads are being integrated into the otherwise thinner fabric, typically 5 to 8 millimeters apart. The fabric thus receives a more or less prominent “square structure”. In earlier “Rip Stop” materials these threads would often protrude from the surface, something which meanwhile does not happen as frequently anymore due to the more recent weaving techniques.

This fabric is noticeably more expensive than our usually applied CAPAtex® fabric fleece.

Rip Stop textiles are used, for example, in tent construction, as material for aerial kites, parachutes, paragliders, air curtains of hovercraft vehicles and increasingly – in mostly thicker, but softer designs– in miscellaneous sporting goods, such as clothing or backpacks.

CAUTION: Due to its fine-meshed contexture this material is significantly less breathable than our CAPAtex® and is thus less suitable, for example for older trailers with wooden structures and large-scale vehicles like caravans, box vans and mobile homes. CAPA “DeLuxe“ is primarily suited for modern full-polyester and aluminum trailers, which are being frequently covered and uncovered by their owners.

Hobbyhorse with wheels
Scroll to top